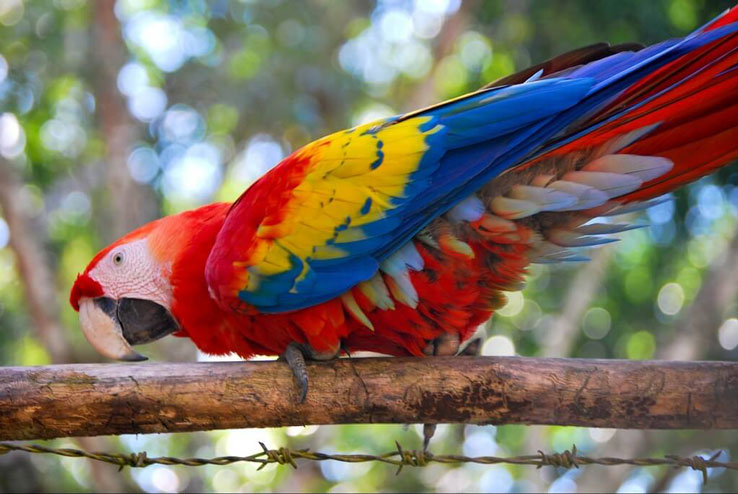 With a body like a rainbow – a mixture of red, yellow, green, blue and white – and a wingspan greater than any parrot on the planet, scarlet macaws ( or “lapas” in Spanish) are breathtaking in flight and a must-see attraction for anyone visiting southern Pacific Costa Rica.

Scarlet Macaws are a must-see in Costa Rica:

From tip to tail, the average adult scarlet macaw measures approximately 30 inches, or 2 ½ feet, in length. They spend most of their time navigating large trees near river mouths and estuaries, searching for food, grooming each other and mating. This particular species of parrot typically travel in groups of a half-dozen or more, and they have the ability to make a lot of noise when they get riled up.

Chances are, you’ll hear a flock of scarlet macaws before you see them.

With rock-hard beaks, scarlet macaw live off a diet primarily comprised of seeds, leaves, and berries. They have also been known to dine on clay. The reason for this, experts say, is that scarlet macaw are able to eat fruits that contain high levels of toxins, and the clay can help neutralize these poisonous edibles.

Scarlet macaws can be found from Mexico through Central America and as far south as Brazil and Peru. In Costa Rica, the best place to see macaws in the wild is on the southern Pacific coastline.

In the city of Dominical, where many of our five-star vacation villas are located, a small group of macaws have been regularly spotted navigating some of the larger trees in town since the beginning of 2015. This particular group of macaws has been very active in the early-morning hours. Traversing tree branches to the delight of coffee-drinking tourists and just-out-of-bed surfers.

As you venture further south toward the Osa Peninsula and Corcovado National Park, the chances of seeing macaws grows exponentially. In fact, if you happen to take a trip to either Pavones or Matapalo – a pair of well-known surfing destination – it’s almost guaranteed that you come across several scarlet macaws in the wild.

These amazing macaw often weigh less than 3 pounds and have an average life expectancy of 30 to 40 years. Though some some Macaws have lived upwards of 50 years. That’s a pretty incredible feat considering all of the unpredictable elements that take place while residing in a rainforest. Each year, mated adults will lay two eggs to keep the family reproduction cycle healthy and active.

Due to their incredible natural beauty, scarlet macaw (as well as Great Green Macaws) have been hunted, captured and sold, illegally of course, for decades. With the scarlet macaw facing certain extinction, several worthwhile conservation groups in Costa Rica have spent the past decade fighting to protect the species. If you’re interested in joining the cause or even contributing from afar, check out www.workingabroad.com. You’ll find opportunities within Costa Rica to live and work with professionals and students who are rehabilitating Central American macaws and releasing them back into the wild. 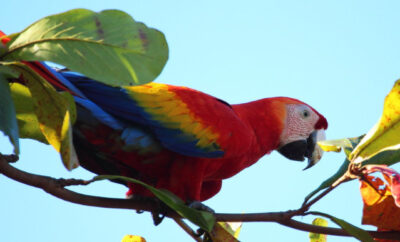 The Scarlet Macaws of Playa ...
You don’t need to be a bird enthusiast to appreciate the rare experience of watching a Scarlet Macaw thriving in its habitat. And you don’t ...
Feb 01, 2022 , 0