Paying with Cash in Costa Rica: Tips on Money in Paradise. 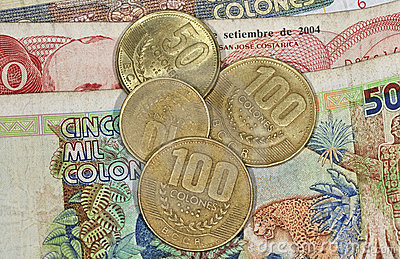 But what about when you get to Costa Rica for that dream vacation you’ve probably spent months planning for? What’s the best way to deal with your cash in paradise?

Our No. 1 tip is to avoid the airport money exchange altogether. At the airport, you will be charged a fee to change your money and, to add insult to injury, you’ll receive a far less lucrative exchange rate than you would at a local bank.

In Costa Rica, almost any type of business–restaurants, stores, bars, hotels–will accept colones — the local currency — and U.S. dollars. Very few businesses will take euros. At smaller restaurants and retailers, it’s always a good idea to have cash on hand because many don’t accept credit cards.

Speaking of banking cards, remember to advise your bank and credit card providers before leaving home that you’ll be using those cards in Costa Rica so that they are aware of your travels and won’t block withdrawals. Visa credit and debit cards are easily accepted in most establishments, but American Express cards are not. In addition, car rental companies only accept credit cards as a form of deposit and payment.

It is possible to conduct your entire vacation by strictly spending dollars. The only drawbacks are that you’ll have to do a lot of calculating dollars-to-colones when you shop, and you might not be fully maximizing your money (more on that later).

Most local banks are open from approximately 9 a.m. to 4 p.m. Monday through Friday and closed on the weekends. There are three banks located within a 15-minute drive of our vacation rentals in Dominical and Uvita. All of the Costa Rican banks have ATM machines, or cajeros automáticos in Spanish, where you can withdraw colones from your checking or savings accounts with a small transaction fee. Some will allow users to withdraw dollars as well.

From late 2010 through early 2014, the exchange rate for $1 consistently stayed near ₡500 colones. So, if you took $100 into a Costa Rican bank during that time you walked out with approximately ₡50,000 colones. Halfway through 2014, however, the exchange rate for $1 climbed to roughly ₡570 colones, and has stayed that way since. Under this current rate, if you walk into a Costa Rican bank with $100, you’ll walk out with close to ₡57,000 colones. As you can see, the dollar is worth more in Costa Rica now than it was five years ago. And the euro finds itself in a similar situation, having risen in value during the past few years.

So the bottom line is this: Bring your money and put it somewhere safe; wait to exchange it at a local bank to get the most value or just stick to dollars; then go shopping, eating, drinking and adventuring and put a bunch of that hard-earned cash back into the local economy. And while you’re doing all this, impress your friends and family by explaining to them that Costa Rican colones are actually named after Christopher Columbus, which is pronounced Cristóbal Colón in Spanish.