You want your vacation to southern Costa Rica to be awesome. But when is the best time of year to visit this emerald-green paradise? Well, it all depends on what you’re looking for, and weather can play a major factor in the type of adventure you and your loved ones can expect to encounter.

The dry season, December through April, is the most popular time to stay at our Dominical vacation rentals. Days are soaked with sunshine–an average of seven hours of sun per day–the waves are playful for watersports and there are enough jungle activities taking place to fill weeks’ worth of itineraries. If you’re looking to grab a book, drop a towel in the sand and lay on the beach while washing away life’s 9-to-5 worries, then the dry season can’t be beat.

But what about the green/wet season? Is that a good time to visit the southern zone?

In short: heck yeah! A typical day during the green season, from May through November, starts a lot like the dry season. Most mornings are sun-splashed and pleasant. If the warm rain comes, it often happens later in the afternoon or evening. Thunderstorms and lightning, cloud-riddled sunsets, crisp offshore winds sweeping in from the valley–each afternoon seems to pack its own special personality during the wet months.

The green season truly is nature at its finest as rivers flow with raw energy and waterfalls cascade with both brilliance and power. During these months, day tripping to a place like Nauyaca Waterfalls, located less than 10 kilometers east of Dominical, can provide breathtaking backdrops and photo opportunities to last a lifetime. There are also a plethora of whitewater rafting tours in southern Costa Rica, to take advantage of during the second half of the year, the most popular of which are adventures along the Coto Brus River and the Savegre River.

Furthermore, the surf here is also enhanced during the green season. Whereas a typical day in the dry season might produce fun, chest-to-head-high waves, swells that pound the southern zone from May on can generate waves twice as big–and sometimes bigger.

In addition to the natural beauties of the green season, visitors can also anticipate paying less for adventure tours and car rental services than in the dry season. And, of course, there are fewer people around town for those seeking a bit more privacy. So, as you can see, the best time to visit southern Costa Rica is anytime. Both the dry and green seasons have plenty to offer. Welcome to paradise.

Microclimates and Costa Rica go together like Siegfried & Roy. Individually they’re cool, but together they’re magical.

With a landscape that spans 19,729 square miles, hundreds of miles of coastline converging with the Atlantic and Pacific oceans, six active volcanos, year-round warm weather and enough rainforests to film a thousand “Jurassic Park” movies, Costa Rica is a prime destination for experiencing various weather patterns on a hour-by-hour basis.

The southern Pacific zone, where our Dominical vacation villas are located, is a particular hotbed for all types of interesting weather. Down here, communities that dot the coastline off the Pan-American Highway tend to have higher temperatures during the day than communities located up in the hills. And by higher in the hills, we’re talking about elevation increases of only 1,000 to 2,000 feet making a noticeable difference in the daytime temperature.

Microclimates – highly-concentrated areas where rainfall, temperature and other conditions vary depending on factors such as the terrain and elevation – tend to pop up on a regular basis during the green (wet) season, which runs from May through November.

On a typical morning during this time of year, you can venture east toward a town like Tinamastes, about a 20-minute drive from Dominical up the mountains, and the weather will likely be cloudy, damp and mild. The beach communities, meanwhile, will likely be hot and sunny, with warm offshore winds rolling down the hills and smacking the breaking waves right in their faces, to the delight of the early-rising surfers that dot the coastline.

Because many communities are spread out on various mountains in and around Dominical, green season weather reports tend to differ from house to house. Rain totals are also all over the map. The average rainfall in the country is 100 inches, but some mountain communities – particularly around the south Pacific and Caribbean coasts – can register upwards of 300 inches in a single year.

The main reason the southern Pacific zone features so many microclimates is because much of its coastline is butted right up against rainforests. These dense, humid areas are an epicenter for plant and wildlife activity, as well as contradictory weather patterns. As the elevation rises going east – away from the ocean – these rainforests become cloud forests.

In the cloud forests, increased elevation and cooler temperatures mean more mist and fog. As these topographical peaks and valleys get higher and higher into the atmosphere, temperatures ebb and flow with greater regularity. A good example is Mount Chirripo, Costa Rica’s highest summit at 12,228 feet. During an ascent up this mountain, it’s not uncommon to encounter blazing heat and frigid downpours within hours of each other. The wind can go from warm and calm to howling and freezing before lunch, and then die down again into a tranquil breeze by early afternoon. Near the apex, it can be downright icy. The coldest temperature on record at Mount Chirripo is 14 degrees Fahrenheit. Does that sound like the tropics to you?

All of these intense microclimates help make Costa Rica what it is: a stunningly scenic, brimming-with-life destination where on any given day the weather can change quicker than a magician can pull a rabbit out of his hat. 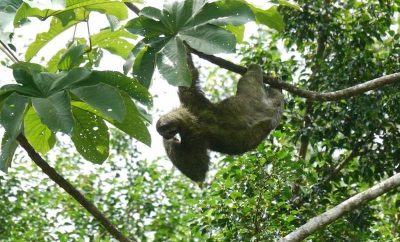 No Rainy Day Blues in Costa ...
Most days in Dominical during the rainy stretch of the year feature bright, sunny mornings with afternoon rain showers. ...
Jul 17, 2022 , 0